St. Dunstan's of Bethesda, Maryland is located a few miles beyond the Washington Cathedral on Massachusetts Avenue in Bethesda, Maryland. The church began its life as a mission church of the nearby Redeemer parish. Francis B. Sayre, Dean of the Washington Cathedral, presided at the dedication service on November 16, 1958 and St. Dunstan's achieved parish status in l965. We still have members of the congregation who were present at the creation and dedication.

The main sanctuary of St. Dunstan's has a beautiful modern stained glass window in the colors of the Episcopal flag. Over the years, an adjoining parish hall, rectory, Columbarium for the internment of ashes, and memorial garden have been added to the Church.

The parish focus on education and music is most clearly seen in its active and thriving Christian Formation Programs.

Through its outreach programs, St. Dunstan's has had long-standing collaborations with a number of local organizations, such as Meals on Wheels, Bethesda Help, So Others Might Eat, and Samaritan Ministries. The outreach program is supplemented by the church's in-reach activities, which help members of the church family who need emergency support.

In the mid-90's and early 2000's we enjoyed a surge of growth as young families have joined the congregation. Our children have a prominent place in the regular worship service and in a number of special events such as the Blessing of the Animals, Christmas Pageant, Easter Egg Hunt and Camp St. Dunstan's summer program. In 2002, in addition to Sunday school, an informal child-friendly Eucharist service in the parish hall was added to the Sunday morning schedule.

There have been many special celebrations of the life of the parish. A year-long observation of our 25th anniversary in 1983 began with a rededication and Thanksgiving service led by the Rt. Reverend John T. Walker, Bishop of Washington, and culminated in a service of consecration certifying the church's permanence. Nearly a dozen of our parishioners went to Glastonbury and Canterbury to mark the millennial anniversary of St. Dunstan's death. Upon their return, a chalice blessed by the Archbishop of Canterbury was dedicated for use. Our Rector, Jeff MacKnight has led two pilgrimages, one to ancient religious sights in Ireland, and another following the footsteps of St. Dunstan in England.   We celebrated our 50th anniversary in 2008.

No history of St. Dunstan's Bethesda is complete without an affirmation of the role of music in our spiritual life. Gifted music directors, dedicated musicians and talented singers, both amateur and professional, provide a beautiful setting for our worship. We have recently added an inter generational hand bell choir, a flute choir and children's choirs to our musical program.

St. Dunstan's in Bethesda invites visitors and new residents in the Washington, D.C. area to worship with us.  We are an open and affirming congregation, welcoming all people as beloved children of God. 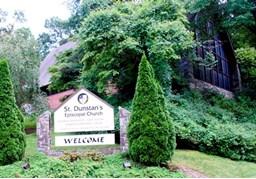